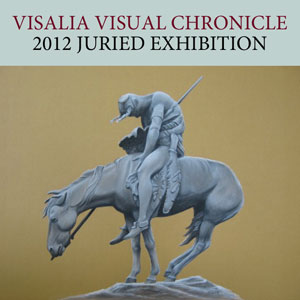 Established in June of 2011, the Visalia Visual Chronicle is a permanent public collection of artworks owned by the Arts Consortium, a non-profit 501(c)(3) organization that connects creativity, community and culture in Tulare County, California and acts as the strategic local partner of the California Arts Council.

Beginning with the Visalia Visual Chronicle 2012 Juried Exhibition, a juried selection process will seek new artworks candidates for a one-year exhibition and consideration for permanent inclusion in the Visalia Visual Chronicle Collection. Artworks selected through the jury process will be featured in a major exhibition at Arts Visalia Art Center, followed by display in prominent public venues for the remainder of 2012. All artworks selected for the 2012 exhibition will be candidates for acquisition into the permanent collection.