Containers of Our Culture 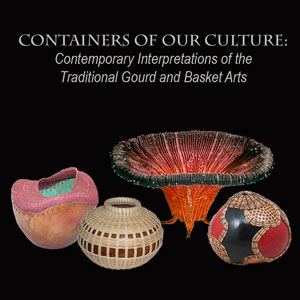 Containers of Our Culture:
Contemporary Interpretations of the Traditional Gourd & Basket Arts

Containers of Our Culture is an exhibition featuring the works of gourd and basket artists from throughout the United States and held in conjunction with a conference of the same name to be held in Visalia on the weekend of April 17th and 18th. This exhibition represents some of the most well recognized practitioners of these traditional art forms.
Cultures worldwide have developed their own styles of basketry, an utilitarian art form traditionally passed down from generation to generation.  The works in this exhibition reflect a wide variety of contemporary interpretations of predominantly Native American methods.  In fact, the participating artists include some of today’s foremost masters of the art of basketry, a recognition one would agree is well deserved upon viewing the works on display.
Among the exhibiting artists are the conference’s keynote speakers, Sue Coleman, of Carson City, Nevada, and Ginger Summit, of Los Altos, California.  Coleman is well known for her expertise in traditional Washoe basketry, methods she learned from her mother Theresa Smokey Jackson.  Examples of Coleman’s work are in the collection of the Smithsonian Institution and in 2003 she was a recipient of the Nevada Governor’s Arts Award.   Summit is known for her gourd art creations and is the author of the comprehensive and best-selling book, the Complete Book of Gourd Craft.
The artistic creations of Coleman, Summit, and the many other instructors is the focus of our exhibition at Arts Visalia and includes some of the finest examples of craftsmanship one will find in any art form. As a whole, the works on display are a virtuosic display of technical weaving skill and artistic design.