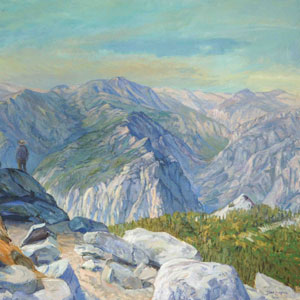 In November of 2012, Arts Visalia is proud to present Granite Territory, a solo exhibition of drawings and paintings of the Sierra Nevada by artist Jane Ziegler. An avid horse-woman, Ziegler takes annual summer pack trips into the Kings Canyon backcountry, hauling paper and canvas along the way. These arduous trips and the artworks which begin there in the remote Sierra Nevada wilderness see final resolution in her studio.

Ziegler graduated from Maryland Institute College of Art. She spent her formative years in New York City learning the ropes of being a city artist, and worked as a professional archival picture framer for many of the big names of the time. But her favortie time of year was August, when she escaped to upstate New York to paint and draw.

Moving from New York to California in 1994, Ziegler found a new source of inspiration for her work. She states, “The Sierra Nevada was instantly inspiring to me- gashes of rock reaching for the sky, spiraling downwards, diving deep into canyons- and completely different from the landscape of the Adirondack Mountains.”

Today, Ziegler lives in Miramonte, California, where she operates a studio. She is a member of the ShadequARTer artists. Learn more about Jane Ziegler’s work at www.janeziegler.com.

This exhibition is being held in conjunction with the forth Kaweah Land and Arts Festival, a series of art exhibitions, nature outings, and community discussions focused on the nature of our relationship to local landscape and its role in our creative expression.

Granite Territory will be on display at Arts Visalia from October 31st through November 30th with an opening reception to be held on Friday, November 2nd from 6:00 to 8:00 pm. Attendance is free and open to the public.

On Friday, November 9th at 7:00 pm, an Artist Talk by Jane Ziegler will be presented in partnership with the Visalia Art League. Recommended donation at the door. Free admission for students.

This exhibition has been made possible through the support of the following business partners: