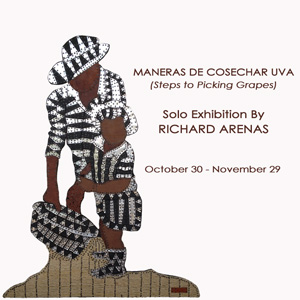 November is a time of year often associated with the harvest season, when the bounty of our rich agricultural land is celebrated.  At Arts Visalia, each of the past four years, we have placed a special emphasis on the work of artists who, through their art, reflect the rich heritage of Tulare County and the region of the Kaweah watershed, the diversity of cultures here, and our deep, agricultural roots.  Keeping in this spirit, we are proud to unveil a new body of works in sculpture by Richard Arenas, an artist who has dedicated his entire creative life to the making of art which addresses these very issues.
Maneras de Cosechar Uva, as the exhibition is titled, or Steps to Picking Grapes, features a stunning group of a dozen new low-relief sculptures by Arenas, one of Tulare County’s most accomplished and prolific artists.  These works represent, in an abstracted and patterned manner, silhouette figures in the physical positions of workers in the field, at labor.

The laborious nature of the work behind each piece reflects the very nature of the repetitive and back-breaking work of the farm laborer.  Each sculpture is made up of dozens upon dozens of small, handcut pieces of leather, metal and wood, assembled into beautifully patterned figures.  These are not protest pieces, nor are they laden with the sentimentality that can often be present in works of homage.  These are works full of honesty, familiarity, and reverence.

A native Californian from a Campesino family from Mexico, Arenas was born and raised in Tulare County.  Having worked the fields throughout California, he feels strongly about social and economic rights for all. He believes in preserving the indigenous history and culture of all people through the arts.  He states, “My personal goal is to immortalize the Campesino, the people of pre-Columbian Mexico, and indigenous people of the world.”

Arenas  has received numerous commissions for his bronze works, including for the University of Southern California, the Veterans of Foreign Wars in Fresno, the Manuel Hernandez Grammar School in Visalia, and a bronze bust for the Stan Beyer Memorial Fund in Delano.  He has received many awards for his art and community involvement including the “Local Hero of the Year Award” from Valley Public Televison and induction into the College of the Sequoias “Hall of Fame.”

The exhibition runs from October 30th to November 29th.  An opening reception will be held on November 1st from 6:00pm to 8:00pm.  Admission is free and open to the public.