In honor of Women’s History Month, Christina Brunk & Abby Rubinstein’s artwork will be on the gallery walls of Arts Visalia to tell the stories of their lives through their art. 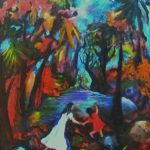 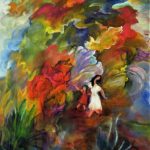 In 1943, at the age of fifteen, Abby Rubinstein began her studies at the art school of the Brooklyn Museum of Art in New York. Having won a scholarship after her first year, she continued her studies with Rufina Tomayo, Josephy Presser, George Pippin, Francis Chris and the watercolorist, John Bindrum.

While studying paintings at the New York Museum of Modern Art, she was moved by the color of the Impressionists and the emotion and movement of the Expressionists like Soutine, Nolde, Roualt and Hyman Bloom. She says, “I learned from each of them, absorbed their lessons, honed my skills and eventually developed my own point of view.” At 23 she moved to California where she studied briefly at the Otis Art Institute and with muralist painter, Leonard Herbert and refined her skills and philosophy defining herself more as an Expressionist painter. She heard a musician say, “Skillfully simple techniques express the most powerful emotions” in describing the music of Bach and it’s how she prefers to explain her approach as an Expressionist artist. She, Dips “into the vast array of ideas, people, stuff and vitality of my work. I seek a configuration of movement, color or atmosphere that corresponds with my innermost feelings. I use this as my vehicle, bending it, and developing it until it speaks for me and meets others with whom it can have a conversation.” 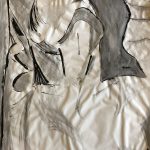 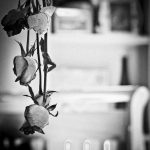 Christina Brunk is a native Californian. In college she studied art with an emphasis in photography at San Jose State University, where she explored personal themes surrounding her trauma and losses.

She feels it’s important to bring these topics out of the dark. Many people suffer in silence with these issues and those that speak out are confronted with awkward confusion. Her photography offers an opportunity to be introspective and invite other people dealing with these issues to the photography to begin a dialogue with others. She feels confident that her perspective and artistic voice can make a difference in the lives of others, but is happy just to be able to find peace in herself through this expression.

So as you can see, Abby and Christina have vastly different work with a commonalty of representation through expression.

The exhibition of Abby and Christina’s work will be displayed March 4th through March 27th, with an opening reception on First Friday, March 6th from 6:00 p.m. to 8:00 p.m.

The exhibition is sponsored in part by