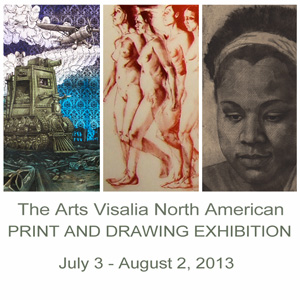 Arts Visalia is proud to announce the opening of their newest exhibition, one which represents a major new endeavor for the organization.  The Arts Visalia North American Print and Drawing Exhibition, a national juried art competition, will open to the public on July 3rd.

For this competitive exhibition, artists age eighteen and older were able to submit up to three artworks for consideration for inclusion in the exhibition, with cash awards up for grabs in recognition of a select number of artworks.

All of the works submitted for consideration were required to have been made within the past three years, making this exhibition a good representation of current trends among artists.  Visitors will see a wide array of works in terms of technique, subject matter, and artistic direction.  Because we in Visalia, and the Central Valley as a whole, are somewhat isolated from the galleries and museums of major metropolitan areas, this exhibition will provide our community and region a view of cutting-edge, original artworks.

Tasked with the job of pouring through all of the submissions and selecting the works to be included in the show was Sonoma State University professor of art Kurt Kemp.  Mr. Kemp studied printmaking at the University of Iowa, from which he received a Master of Fine Arts with honors. He has exhibited widely throughout the United States and internationally and his works are included in numerous private and public collections including Harvard University’s Fogg Museum of Art, the Palace of The Legion of Honor in San Francisco, the Houston Fine Arts Museum, and the Art Institute of Chicago.

In all, ninety artists from throughout the United States and Canada submitted two hundred and sixty two artworks and, in the end, thirty-seven pieces by thirty artists were selected. Of the juror process, Kemp says, “Having been on both sides of the equation, artist and jurist, it was my intent to marry the elements of aspects of technique and craft with the abilities of the artist to communicate to their audience.”

He continues, “From the overall response and the quality of the entrees it seems to me that there is no better time than now to be an artist who chooses to work on paper.  The variety of approaches to printmaking and drawing, and the virtuosity of the various mediums seems more than enough proof of this.”

The inclusion of one’s work in a juried exhibition of this scope serves to enhance an artist’s resume and affords them the opportunity to compare their work to that of other artists.  Similarly, visitors to the exhibition will have the opportunity to see artworks by artists they are not likely to have encountered previously, to get a sense of what professionals in the fields of printmaking and drawing are making right now.

In fact, a few artists from Tulare County and the Central Valley region had works selected for the show, including Ellen Milinich, John Coppola, and Matthew Rangel, all of Visalia, as well as Matthew Hopson-Walker, of Fresno.  In addition, three former College of the Sequoias art program alumni, each of whom have since moved on to other pastures, had works chosen for the exhibition.  These included Francisco Alonzo and Chris Wallace, who have recently completed Master of Fine Arts degree from Cranbrook Academy of Art and the University of North Texas, respectively, and Rogelio Gutierrez, who is now an assistant professor of art at Arizona State University.

The exhibition will be on display from July 3rd through August 2nd, 2013 with an opening reception to be held on the evening of Friday, July 5th from 6:00 to 8:00pm.  Admission to both the exhibition and the reception are free and open to the public.  Arts Visalia is located at 214 East Oak Avenue in downtown, Visalia.  Gallery hours are Wednesday through Saturday from noon to 5:30pm.  For more information, visit www.artsvisalia.org.

This exhibition was made possible through a grant from the City of Visalia Community Arts Grant Program as well as support of the following business partners: